Home   |   Digitalization   |   Industrial Digitalisation in the light of the Pandemic

Industrial Digitalisation in the light of the Pandemic

The full economic consequences of the coronavirus pandemic are far from being understood, but it is already clear that there will be lasting if not permanent changes to global trade. Industrial Digitalisation will play a key role in helping manufacturing companies survive the coming turmoil. 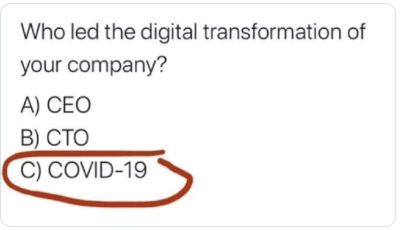 Global free trade was already under pressure due to the trade war between the US and China. The pandemic has further highlighted to many nations their dependency on distant, politically sensitive, low cost countries for goods that have suddenly become critical to their healthcare systems, such as face masks and ventilators. The crisis is leading both nations and businesses to re-evaluate their dependency on long supply chains. This is likely to create opportunities for reshoring or nearshoring the manufacture of a wide range of goods. Particularly those deemed strategically important in the light of a new global economic reality. But making reshoring or nearshoring work will require significant reductions in the cost of local manufacturing.

Enter the Fourth Industrial Revolution (4IR), the digitalisation of industry. 4IR potentially offers the means to reduce manufacturing costs and improve efficiency to an extent that makes reshoring feasible. A recent report from McKinsey and the Global Lighthouse Network states that companies who have adopted 4IR tools have seen benefits which include 15 to 30 percent improvements in labour productivity, 10 to 30 percent increases in throughput, 30 to 50 percent reductions of machine downtime, and 10 to 20 percent decreases in the cost of quality. The ability to benefit from these gains will be vital to weathering the years of economic turbulence consequent to the Covid-19 crisis and to grasping the opportunities that will undoubtedly arise.

The key to benefitting from 4IR is committed leadership and management action. In comparison to establishing this, implementing industrial digitalisation is relatively straight forward. Experience shows that many manufacturing businesses have bottlenecks that can be quickly solved by a small dose of digitalisation. Quick wins are often possible in a three month timeframe. Such short term success breeds enthusiasm within an organisation to tackle the next bottleneck and leads to a pragmatic and efficient growth of digitalisation. Frequently the biggest bottleneck to industrial digitalisation is getting started. The differentiating factor between companies who are successful and those who are not (yet) is committed leadership from the top.

Specifically, “committed leadership” means that executive management should believe in the benefits of digitalisation in advance of supporting business case evidence from within their own organisation. When evaluating a digitalisation proposal, it is extremely difficult to forecast the specific benefits for a business. Companies that lag at or struggle with digitalisation are often driven by a leadership that bases its decision making on business case evidence. Consequently, the organisation is limited in both the adoption and deployment of 4IR tools and equally in the resulting benefits. Experience shows that when the leadership believes in digitalisation ahead of specific evidence of its benefits, adoption and deployment proceeds more effectively and benefits, both anticipated and unexpected, become apparent more quickly.

Another angle to consider is that the pandemic will result in a shake-up of markets on a scale that dwarfs that of the 2008 economic crash. Weak businesses will lose to the strong, slow businesses to the smart. In the resultant shark-fest, speed, agility and the ability to efficiently deploy resources will differentiate winners from losers. There will be no time to make decisions based on internally developed evidence. Leadership during this crisis is about making judgement calls based on experience and belief. There is enough general evidence of the benefits of industrial digitalisation for business leaders to believe in it and commit to it, particularly in the light of the current crisis.

That businesses now face exceptional challenges is a given fact and exceptional measures will be required before a new economic equilibrium is reached. For industrial companies, digitalisation represents a sure way to create a leaner, more efficient organisation capable of quickly responding to or driving changes in the market. Investing in 4IR is a sure way not to waste a good crisis.